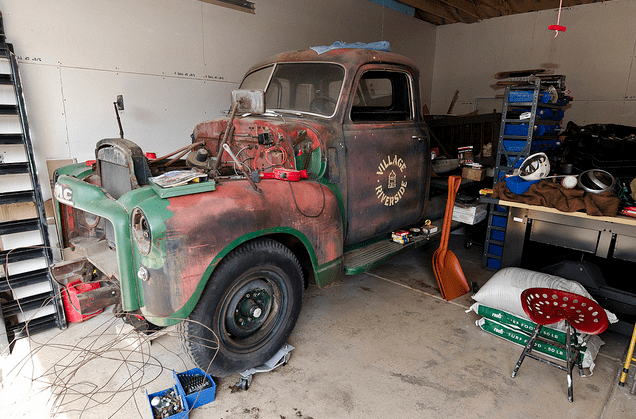 One of the great things about the Chicagoland classic car and truck community, is you can never be quite sure what area enthusiasts will have in their garages. The Midwest may mean bitterly long winters but that just gives more time for the wrenching guys and gals to fine-tune the cool and unique project vehicles they have tucked away.

Andrew Keppel, and his brother Adam, are two area residents who certainly have a fascinating four-wheeled machine in their possession that’s got loads of local history. 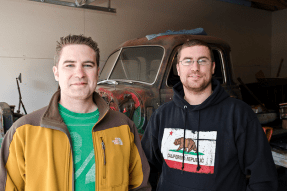 Andrew & Adam Keppel in front of their ’48 GMC.

Several weeks ago, we stumbled upon the Keppel’s 1948 GMC 1-ton truck while shooting a feature on the brothers’ restored 1969 Chevrolet Malibu. Their bow-tie bruiser has barely been completed a full year, but that didn’t stop the boys from getting the itch to roll up their sleeves and find something else to dive into.

Andrew filled us in on the storied background on this new vehicle build.

The 1-ton truck as Andrew found it.

“After completing the Malibu we realized we needed a new project. This one came up at the right time… and at the right price: FREE. My brother

has liked old pickups for a long time now and has even owned three early ’40s Chevy’s in years past. This GMC was stored in my boss’s barn for the past 15 or so years so I always have known it was there, but never new it could become ours. We pulled it out of the barn in December of 2011 and found the body had a lot of your typical rust issues, but the engine seemed in good shape.

A bed-mounted spray tank was used for lawn care use.

The truck was originally a Village of Riverside utility truck. It had a spray tank on the back for doing tree care and other lawn maintenance. From what I can figure out it looks like the 1-ton was sold to a golf course in the western suburbs in the late 70’s where it continued to be used as a spray truck. In the mid 90’s they no longer needed it as it had been taking up space in there shop for a decade or so. This is when the owner of my company was gifted the truck if he would just pick it up. He did, and had plans of a restoration that never occurred.

The truck loaded up and ready for relocation.

The color seems to have been red originally but it is now a mix of red, green, and an orangish color. The model is somewhat rare as it is the only year that GMC made the grill with 4 bars across. We picked up a beat-up bed from Oklahoma and have done a little banging dents out of the metal, replaced the coil and a couple of other little things here and there, but we did get the truck running this past Sunday. The engine is a straight six attached to a 4-speed manual.

The Keppels have started getting their 1-ton street ready.

Originally we were going to fix all of the rust and fully restore it but we have since decided it is going to be too much work to do. Now, it will live for a while as a ‘farm truck’. We removed a bunch of the front end to sand down and repaint before we realized this, so it will definitely look like a work in progress! Some day we might pull the 6 and drop in a V-8, box the frame and change out the drive train, but that is going to be a few years down the road.”

The guys are hard at work but for now, all we can do is wait and anxiously check in on their progress as they bring this local vintage hauler back to road-going life.

Check out our photo gallery showing a few more photos of when they first found the truck and as it sits now in their garage.