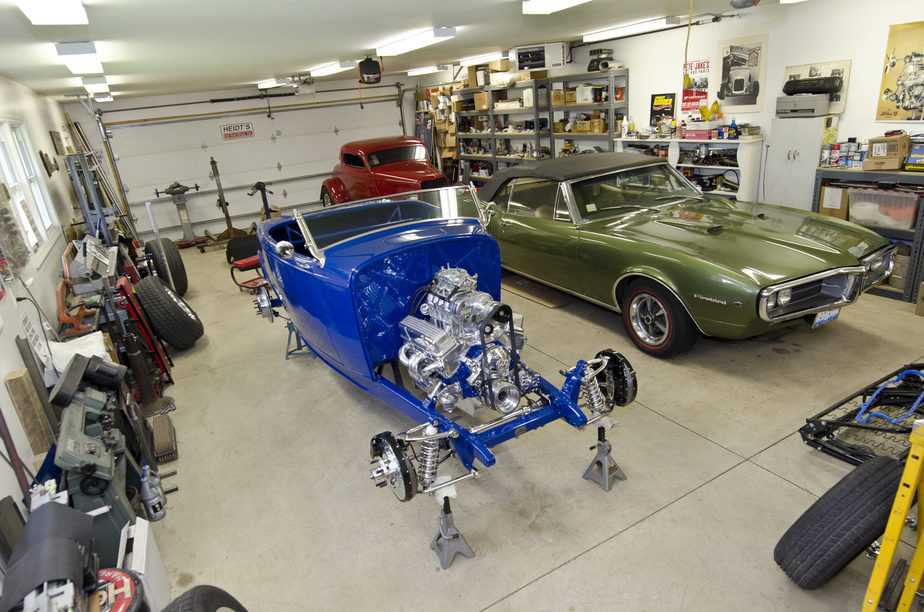 In the world of hot rod suspension components, one name that should instantly come to mind is Heidts. For over 25 years, the Chicago suburbs-based company has been cranking out suspension parts that have a solid reputation for being easy to install right out of the box and more importantly, working right.

The man who started it all is Gary Heidt, who created the business in September of 1985 out of his home garage. The Rolling Meadows resident has since sold the company and has retired but his days of building hot rods are far from over. Gary recently invited us over to his place, where he told us the tale of how he got started in the automotive aftermarket industry.

“I had just finished my ’33 Ford, which had suspension parts on it I had made myself and was wondering what should I do next. That’s when I saw a buddy of mine at a St. Charles car show who told me I should make some more parts and sell them. He told me, ‘If anybody can make these Mustang II front end parts, that fit right and work right, they’d probably do good.’ Those were his words and I’ll never forget them. I worked on them and brought a set to the shop that he owned. He asked if we could install them right then on a customer’s car, so we did, took some pictures and started marketing. Shortly thereafter, things really started to take off.”

While we were at Gary’s, he also showed us his new personal custom creation, a 1932 Ford roadster.

“In 2008, I had a lot of ideas I was kicking around. I started formulating a plan, going after a certain look I wanted. A lot of guys start from the inside out but I build from the outside in – I start with a look then build the rest around it. I knew I wanted a Brookville roadster bodyso I ordered a pair of ’32 frame rails and started building the chassis. Naturally, when it came time to think of suspension, I did things differently. Traditionally, a ’32 Ford should have a dropped axle. My suspension components are an independent setup, which is what I installed on the car. A lot of guys say I’m breaking the rules of tradition and that may be but if I ever built a car without my suspe

nsion on it, I know I a lot of people who would want to tar and feather me!”

Under the hood on this dream machine, Gary has installed a 383ci Chevy V8, fitted with a Weiand supercharger along with a Muncie 4-speed trans and Hildebrandt rear-end for added performance.

“It’s got a decent cam, not too radical. On some recent dyno runs, it pulled 515 horsepower and 535 lb-ft torque, at 5500rpm on pump gas. It’s completely a street motor and something that will be driven all around. My wife says this is my ‘lose my driver’s license car’ and it is very light with such a large motor, so we’ll see if that’s true or not. I do know it’ll go sideways if I step on it.” 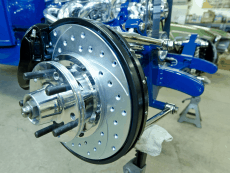 When Gary feels like slowing down, he’s got four-piston, Wilwood disc brakes installed at the four corners to bring his ultra-cool cruiser to a halt.

“The interior will be all black leather in a real basic style. Nothing swirly or fancy. I really want a traditional hot rod look.”

show, Gary came across some new material that will help keep the temps down during summer time driving.

“I saw a car with an interior of a new product called ‘cool leather’. It’s real leather but has a reflective coating on it that you can’t see but helps to prevent it from becoming too hot to the touch. Its really amazing stuff.” He’ll use that special material to cover the yet-to-be installed bench seat and door panels.

“There are 161 louvers that I punched myself. It took me four hours and was way too hard! I’d do it again but only on my own car.”

The plan is for this drop-top beauty to be completed later this month, just in time for an August showing at the 43rd Annual Street Rod Nationals, held at the Kentucky Exhibition Center in Louisville, KY. After that event Gary has plans for a much larger, cross-country voyage.

“This year is the 80th anniversary of the 1932 Ford. A large group of enthusiasts are driving from San Francisco, CA and ending up at the Indianapolis, IN Goodguys show in September.  I’m going to meet them in Lincoln, Nebraska and backtrack all the way to Indy.”

That’s not all the seat time Gary has planned as next year he plans on driving out to the 2013 L.A. Roadster Show, held in Los Angeles, CA. “This car was built for driving and that’s how I plan to use it – I don’t keep a trailer in my driveway!”

Gary has a full set-up in his garage to machine the parts he wants to include on his rolling creations. He used a lathe to cut a 2-inch thick piece of aluminum into custom front brake rotor covers for this ’32 Ford.

“I had only these types of scoops on one other car and wanted the look on my car. It was too cool to not do. After a couple weeks of lathe work, I ended up with the pieces I needed and 6 garbage bags full of aluminum chips. It was a labor of love but I’m sure glad I did it.”

Watch the video below to see painter Dan Mason spray on the Lombard Blue paint.

Click on an image below to open our full-size photo gallery: 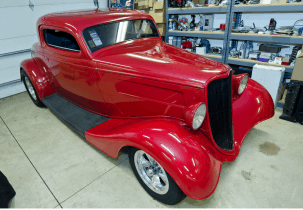 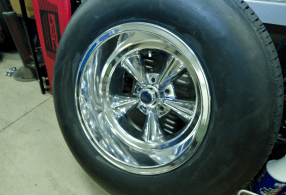 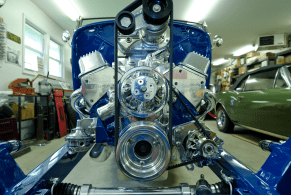 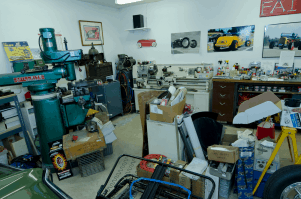 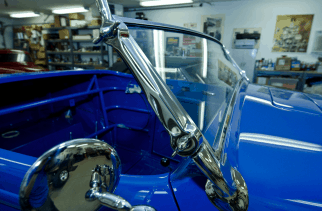