When it comes to family and cargo hauling, the full-size vehicle of choice has radically changed. Today, huge, sky-high lumbering SUVs are what most active moms and dads opt to load up before heading out for the summer beach vacation or that multi-store mall shopping trip. It wasn’t always that way – at one point in time, station wagons, like this 1961 Ford Country Squire, ruled the school pickup lanes and soccer field lots.

Richard Sacks is the proud owner of this classic Raven Black people-mover and purchased it at the Monterrey, California Russo and Steel Collector Automobile auction in August 2011.

“I was drawn to it simply because of the time I grew up in – this was the predecessor to today’s SUVs,’ said Richard. “Anyone close to my age, a baby boomer, remembers growing up and having parents stick them in the back of one of these for the family trip – just like Clark Griswold. Spectators always just smile when they see this out as everyone in the neighborhood had one. The bigger the family the more common they were.” 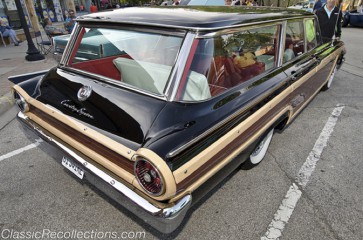 When Richard came across this dream machine it was in its current fully-restored state.

“It had just been through a complete nut and bolt restoration and what most would call ‘over-restored’ – meaning it has features that it didn’t originally come with. Despite the excess nature of the build, it stills maintains the visual appeal that I was looking for.”

While the wagon had been a California-based cruiser, the man responsible for the over-the-top craftsmanship was located on the East Coast in Atlanta, Georgia.

“He completed all the work in his personal home garage, all the while caring for his dying mother. The build was simply a painstakingly process that resulted in just a pure number one car. I made sure to tell him that over and over – he really did a fine job.”

Powering the blue-oval land barge is a 390ci V8 which puts a modest 325 horses to the pavement. Being behind the wheel is just as Rich had expected.

“It’s got that typical 1960’s feel – the steering is vague and very loose. It is equipped with radial tires so it doesn’t have that bias ply ‘wander’ that you’ll see in a lot of vintage cars. Overall, this is just one big boulevard cruiser that drives great.” 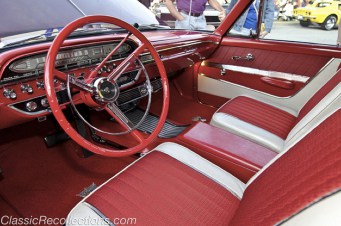 Power steering helps the driver point the massive wagon in the desired direction while power windows and factory air conditioning give a touch of class and comfort to interior occupants, seated in the red and white cabin.

From the factory, the deluxe Ford’s fiberglass side panels were not covered in real wood but rather simulated vinyl appliqué.
Rich’s authentic-appearing lumber is composed of neither element but rather was hand painted on, resulting in a ‘much richer look, given the sheen.’
Like most of us, Rich has sadly realized these iconic family haulers are a dying breed on today’s motoring thoroughfares, giving way to modern crossovers, hip minivans and other much larger truck-based behemoths.

“We don’t have large station wagons like this anymore (except for a few European models, that just aren’t the same). That’s why I enjoy driving this one so much and showing it off – to remind people of how things once were and to bring back some happy childhood memories.” 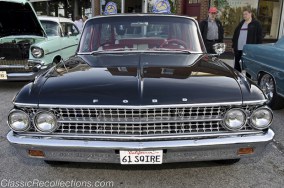 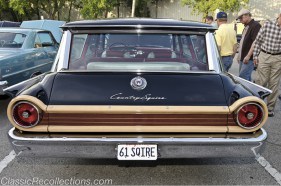 **Do you have a special station wagon memory? Tell us about it in the comments below!**