Pete Zopel’s radical 1956 Chevrolet 3100 pickup project all started because of something he calls a ‘bucket list motor’.  “I have swapped engines in and out of cars before but never really built something entirely from scratch. That’s exactly what I did with this one – I built it just the way I wanted, using all my ideal components. It was just something I wanted to do before I ‘kicked the bucket’.

Starting off with a 464ci Chevy V8, he had it bored over and beefed up with a stroker crankshaft, which brought total displacement to 496ci. Those 8-liters deliver 600 horsepower to the rear wheels.

When Pete built his epitome of an engine, he didn’t have a vehicle to put it in which caused him to go on the hunt for a prospective candidate in the fall of 2010. “I needed something which could handle a setup like this and really liked the looks of the classic lines of the Chevy pickups.”

He found this extensively modified 1956 3100 near Nashville, TN but had to wait several months for it to drop into his price range. When he took delivery of the hot-rod hauler, it was already coated in its eye-catching mid-1990’s VW yellow paint and had a pro-street inspired setup.

“Underhood was a race motor and it had real big tires in the back. It wasn’t much good on the street.”

Pete dropped in his engine and mated it to a 700R transmission. He also installed the bed-mounted toolbox, adding to the truck’s functionality. A Camaro front end suspension resides at the nose and a Ford 9-inch is in the rear. 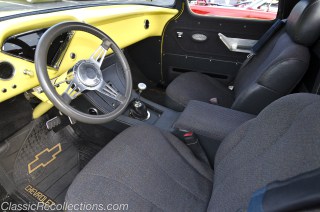 The cab roof was chopped 4-inches and tucked inside are late-model Chevy pickup seats and a Dakota digital instrument cluster that retains the original-style placement within the chrome ‘V’ housing.

“When you’re out driving, you’ll quickly find it doesn’t take very much effort to go very, very fast! But I’m extremely pleased that the motor came out so well and works with the truck’s overall setup.”

With its eye-searing yellow paint, chopped roof and ground-hugging stance, Pete’s 1956 Chevrolet 3100 definitely turns heads when he cruises by local events and shows.