Honda has always had long standing tradition of building four-wheeled offerings that have a strong reputation for being practical, inexpensive and highly fuel-efficient. While their modern machines readily display these qualities, it may come as a surprise to learn that their very first model imported to the US market was a petite little car that also captured that spirit of motoring. 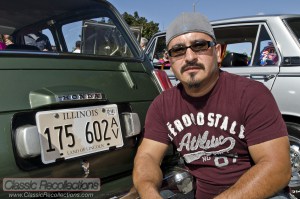 It was called the 600 and was available first as a sedan in 1970 or later in 1971 as a hatch back coupe. Both disappeared in 1973, making room for a new nameplate, the Civic. When the 600 landed in dealerships, it was the smallest and cheapest car available on the US market. Its diminutive dimensions and ultra low price were a sharp contrast from the massive, fuel-guzzling land barges American consumers had grown accustomed to.

The marketing was simple: the Honda sedan hooked in buyers who were looking for cheap and basic transportation. Decades later and that small-car charm still works. A few years back, Francisco Hernandez was passing through Berwyn, Illinois and spied this 1971 600 Sedan. “Initially, I purchased the car just to drive it around and mess with it a bit – nothing major. My idea was to quickly get rid of it after a while.”

That flip-it-fast plan changed once the gearhead spent some time with the cute go-kart machine. “After I had it for a while and I kept looking at it in my garage, I couldn’t help myself. I just fell in love with the car,’ said the Stickney, Il resident. 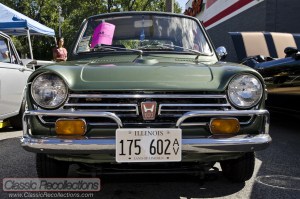 When he made the purchase, the microcar was in ‘very poor condition’ but had the makings of a solid foundation. “It was drivable and running but the body was just terrible. What I did like was that it was all original. It had never been modified or even painted. That’s what made me want to buy this particular one.”

The sedan may have been roadworthy but that status changed after Francisco let the teeny Honda sit for a year, while he made time (and money) to take on the project. “The brakes were shot and no longer reliable. I replaced all the wheel cylinders, turned the rotors and drums and replaced a few brake lines. It’ll now stop on a dime.” 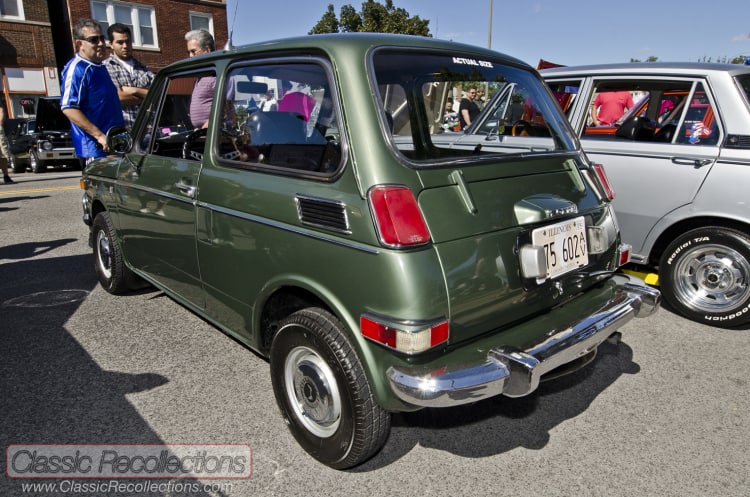 The 600cc, 2 cylinder air-cooled engine was also overhauled and rebuilt with all original parts. Factory specs peg horsepower output right at 36bhp. A four-speed manual transmission gets those ponies to the asphalt. As to be expected, the motorcycle-sourced engine doesn’t deliver mind-boggling performance numbers. A 1972 Car and Driver road test found the 600 took a yawn-inducing 20.8 seconds to get to 60mph and clocked a top-speed just north of 75mph. The quarter mile came in 20.3 seconds with a top end speed at 60mph. Impressive, no, but these simple Honda’s weren’t built for brawn but rather bang for the buck.

As Francisco’s sedan had spent most of its life in the blustery and road-salted Mid West, the metalwork was far from mint. “Rust had taken most of the front fenders and both needed replacement.” The pint-sized proportions of these city commuter may have many good attributes, but there is one major consequence: other drivers in much larger cars. “There was a lot of surface, cosmetic damage from parking lot door dings and bumps. The sides were just battered.” 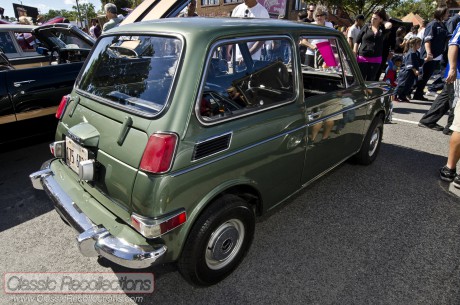 Once the sheetemetal was repaired and straightened, the paint was stripped and everything was prepped for a new coat. To maintain authenticity, Francisco sought out a color that was a closes match to the factory Metallic Green paint. “I wanted it to look just like it did when it came out of the factory. And the green was one of my favorite elements of the car.”

Inside the pocket-rocket, the black interior has been left alone, save for some window rattling sound equipment hidden in the rear compartment area. 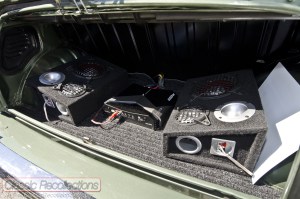 An amp and speakers are hidden in the rear tiny cargo area. 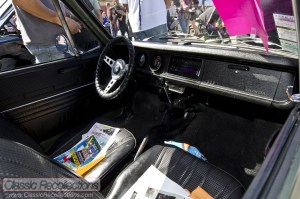 The black interior has been left alone. In theory, it holds four passengers.

“You can’t really describe the driving experience. That’s why I changed my mind about what I was going to do with the car. You take it out and people are looking at you in a crazy way – they have never seen one before. It makes it real satisfying.”

Francisco may have wanted to just toy with the too-fun Honda but now he’s got a different perspective. “My only plans for the car are to keep it the way it is. I just drive it and put it back in the garage until the next car show.”

The green-machine turned more than a few heads when parked at the Berwyn, Il. Route 66 Car Show.

A coupe version of the 600 sedan was introduced to the US market mid year 1971, as a 1972 model. It featured a sportier hatchback design and retained the same air-cooled, two-cylinder SOHC 600cc engine found in the sedan. Period advertisements were not afraid to flaunt the coupe’s ultra small size. Honda argued it was far superior to much larger competitors, for reasons buyers may not have been aware of.