Buicks have always had a reputation for being large, comfy cruisers packing plenty of panache and this 1968 Wildcat is no exception. During the 1960s, the Wildcat model was the Detroit brand’s midsize offering and was readily identifiable by its characteristic style line that swept from the headlights, down along the goes-on-for miles body and finally ending at the stylish rear chrome bumper.

Kurt Fredricks owns this plush Desert Sand two-door example. He found it in Madison, WI in 1998. “It was parked at the Jefferson Car Corral and was in fairly good condition.  The previous owner had restored most of it and was almost through. All I had to do was finish the old girl up.”

The skilled handyman is no stranger to the GM brand, having already completed a full restoration on his 1953 Buick. For this second undertaking, he was looking for a project that would come together a bit more quickly, allowing him to be out on the road sooner.

“I bought this Wildcat simply because I just loved the timeless lines of it. It’s design is so unique and just a fun car to be in. I knew I could have it wrapped up in no time.”

Just because the seemingly turnkey ride was nearly complete, that didn’t mean Kurt was left with absolutely nothing to do. “Inside, the main problem was with the driver’s seat. It was pretty torn up and well worn. A new cover went on and it was good as new. Out on the exterior, the back end needed a repaint. Some of the body work on the rear fenders wasn’t as good as it could have, or should have, been.”

Rally Wheels give a hint of sportiness to the massive coupe.

Underhood resides the stout original 430-cid V8, packing all its 360 horsepower and freight train-like 475-lbs./ft. torque. The colossal powerplant was left untouched, as well as the 3-speed Super Turbine 400 transmission.

Slide inside and the luxurious all-black cabin treats occupants to cozy bucket seats, separated by a center console, power windows, power brakes and power steering. A factory 8-track is mounted in the dash and allows Kurt to cue up his favorite yesteryear tune. 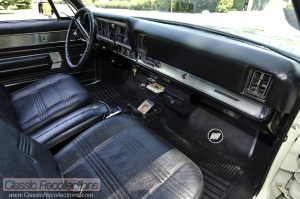 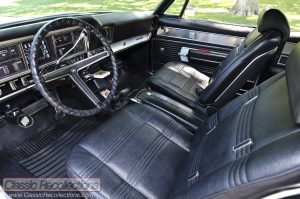 “Driving is astoundingly fast – don’t let the massive size fool you – it can really move. When you get out on the highway, you’ve got to be careful otherwise you’ll be doing 75mph (or more) without even blinking!” Naturally, the downside to that rapid rate of velocity is bringing the nearly 18.5 foot long Buick behemoth to a halt. “Stopping is another issue. It’s equipped with four, very large drums but it can still be a chore to brake. You really have to think and plan ahead about where you want to go and how you want to get there. Finding a parking spot can also be a pain in the neck.”

Despite the motoring annoyances, Kurt still enjoys piloting his cruiser around his home state of Illinois but has taken his ride up to the roll through the back roads of Wisconsin on a few occasions, participating in shows and events.

When it comes to official production numbers, a total of 68,068 Wildcats, available in four-door, convertible or two-door configuration, were sold in 1968. Kurt’s 4,250lb fastback never strayed far from its original dealership where it was first sold all those years ago.

“After leaving the factory, the car went to Palmer Buick in Oak Park, not far from downtown Chicago. I still have the original dealer name badge on the rear trunk. Given its remarkable condition, it’s hard to believe it’s stayed in the Mid West for its entire life. Normally, vehicles like that have been chewed up with rust and are beyond saving.”

Given Kurt’s hands-on proclivity for tinkering, he already has future plans for the four-wheeled feline. “While the car is good to go as is, I’m planning on doing some minor engine work. I just can’t leave it alone. I want to pull it out, get my hands dirty and  play with it.“

A Look at Back Then:

We’re not sure how many contractors or engineers used a Wildcat to get from job site to job site as portrayed in this period advertisement, but assuming some did, they would certainly be wrapped in comfort and luxury.