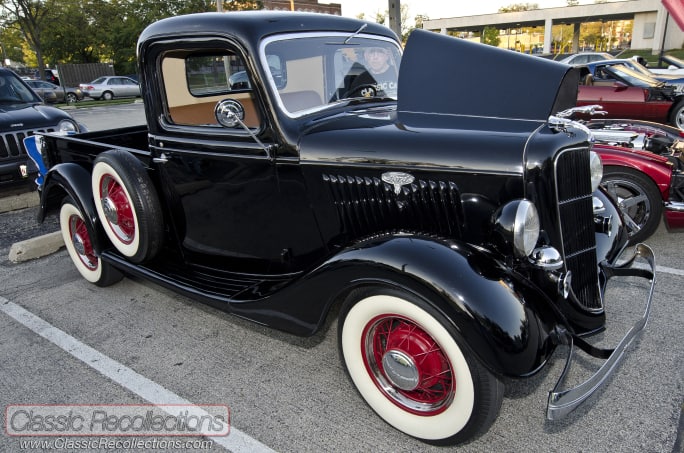 As is often the case, when Butch Nelson sold a 1955 Chevrolet car project several months ago, that bow tie classic left a four-wheeled hole in his heart. “If wasn’t long before I was getting lonesome and wanted something new,’ said the auto enthusiast. Having owned multiple examples of Tri-5 Chevys, muscle Chevelles and a whole host of other classic and antique automobiles, having a cool ride in the garage is something he’s grown well accustomed to. He found what filled that void deep inside was a handsome 1936 Ford Model 68 pickup. “I located the truck in California, in the Bay Area. It just drew me and was something I wanted right away. I knew it would make me happy.”

After a quick exchange of cash and keys, Butch had the vintage pickup shipped back to his home state of Illinois and right away began tailoring the hauler to his liking. “I did a lot of odds and end work and checking things out. All in all, the truck was in great shape and didn’t need too much attention.” It’s superb condition part of the plan, as Butch didn’t want to waste valuable on the road time with a falling apart jalopy. He immediately wanted to get out and enjoy the new purchase. “I knew going into the project I didn’t want to get into a long term restoration like I’ve done for years. I wanted something more in the finished end – something that’s fun right away instead of needing tons of money and constant repair.”

Underhood is a flathead V8 engine sourced out of a 1940 Ford model, that Butch confirms has been ‘upgraded a bit’. Power gets to the asphalt by way of a 1939 Ford three-speed transmission. From the factory, this blue oval machine came equipped with four-wheel drum brakes that were mechanically operated. Suitable for the day, but long since outdated for regular use on modern boulevards. A reliable hydraulic system was installed for more confident braking.

Things to come in the near future for this pickup involve the curvaceous exterior. “Originally the truck was yellow with black fenders but at some point years and years ago, it received some bodywork and a decent paint job. Soon I’m looking to repaint it and add a new coat,’ said Butch. Until then the staid black paint is perfectly complemented with wide white walled tires, wrapped around red wire wheels. Polished chrome and bright work add just enough twinkle to make this Ford cruiser stand out in a crowded lot.

Ensuring his motoring heart stays filled; Butch is wasting no time in getting behind the wheel to get some serious seat time. “Driving is really neat. It’s hard to imagine back in the day, the 1930s with their road conditions and how vehicles were driven and used. Now we have nice, wide paved streets but these antique vehicles virtually ran down gravel and dirt roads!”

The interior is simple and clean – just the way it should be.

To honor his Norwegian heritage, Butch mounted the country’s coat of arms badge on the grille.

A Flathead V8 from a 1940 Ford was been mounted underhood. 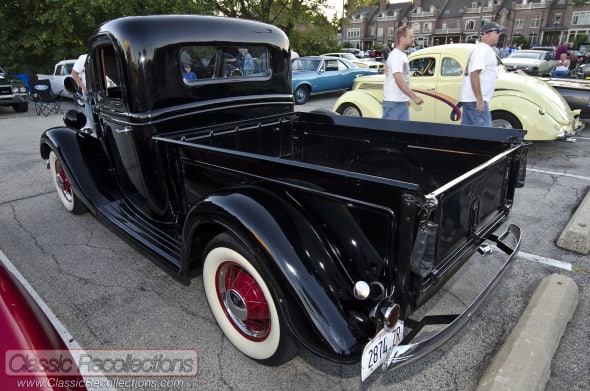 A repaint is in the pickup’s future but still turns head with its read wire wheels and wide white-walled tires.