The 2012 Muscle Car and Corvette Nationals boasted lots of special four-wheeled displays as well as numerous celebrity appearances. One example that greeted visitors as soon as they entered the event was the unveiling of this freshly restored 1969 Hurst/Olds convertible and ‘Miss Hurst Golden Shifter’ herself, Linda Vaughn. Signing autographs both days, Miss Vaughn had show goers lining up, anxious to see and meet the racing icon.

According to Hemmings, a Hurst 455-powered Hurst/Olds convertible was never built in 1969 for public consumption. However, three did manage to be assembled and were distributed for promotional uses. One was destroyed in 1969, while the other two went separate ways: one to the East Coast and the West Coast. The vehicle at this past weekend’s show was the West Coast vehicle. It was in storage in California until this past summer, when the restoration began. Level One Restoration in Arvada, Colorado was the crew responsible for the transformation.

Miss Vaughn chats with a swooning fan at the show. 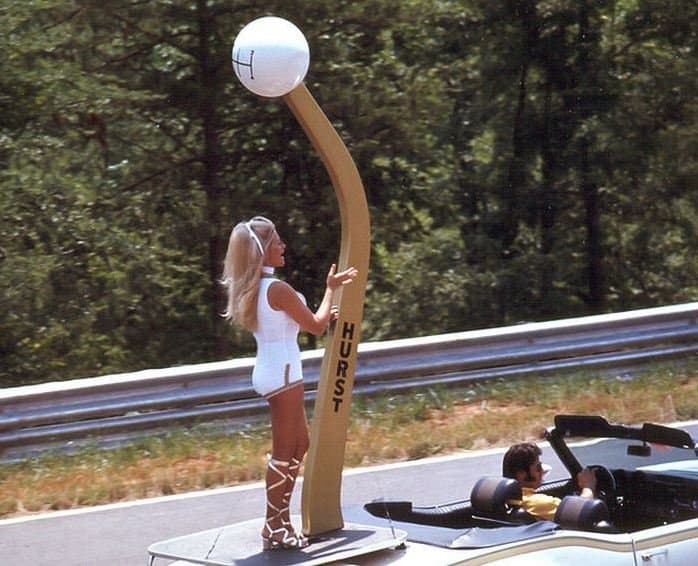 From 1969-71, Miss Vaughn could be found riding on the back of this modified 1969 Oldsmobile convertible, advertising for Hurst Shifters. Here she is at Road Atlanta in 1971.

Click HERE to watch a video showing the ‘First Lady of Motorsports’ in action at the 1968 U.S. Nationals, riding atop a 1968 Hurst/Olds convertible.