Matt Avery is an award-winning classic car media producer based in Chicago, IL. After spending several years working as a repair technician for several OEM brands as well as different independent repair shops, he made the decision to switch gears to begin working in the media and entertainment industry. “I kept coming across these cool cars,’ said Avery. “More importantly, what I discovered was the fascinating stories behind each and every one. That’s what really drew me in. I began to see vehicles weren’t just about horsepower, specs and raw data. Each and every one has a rich and colorful history, full of family connections, emotional ties and fond remembrances of days gone by. It’s become crystal clear to me that every car has a story.”

Since then, Avery has combined his written, photography, video production and web content to document and capture these motoring memories. He travels far and wide to interview owners and track down leads. He can be regularly seen in the Arlington Heights, IL-based, Daily Herald, producing the classic car feature, Classic Recollections. In addition to spotlighting Midwest owners and their rare and unusual rides, he also covers classic car cruise nights, auto museums walk-thrus and all other kinds of car related content. The feature is distributed throughout 90 communities, covering nearly 1,300 square miles. 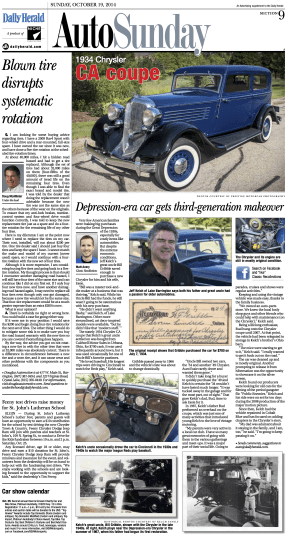 During his career, Avery has worked with automotive celebrities such as John Snieder, who played Bo Dukes in the hit TV show ‘Dukes and Hazzard’. Photo courtesy of Volo Auto Museum 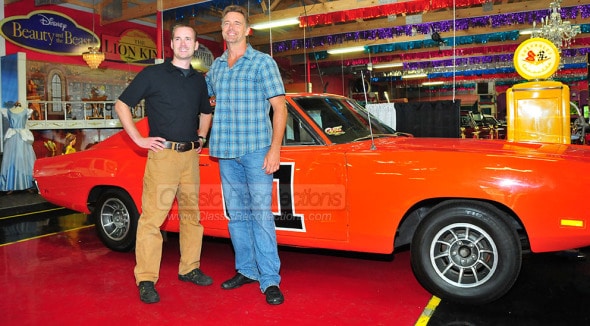 In 2013 Avery was awarded an IAMA Bronze Medallion from the International Society for Vehicle Preservation for his media content in preserving automotive heritage and history. In 2014 he was awarded IAMA Silver Medallion for his work.

Avery has made it his mission to work hard to preserve the legacy of classic American motoring.  He’s currently producing several features on Route 66 and Pontiac, IL.

Avery attends many classic car events, such as the 2014 Muscle Car and Corvette Nationals, held in Rosemont, IL and works with other professional auto media personalities, such as Dennis Pittsenbarger, star of Discovery Channel’s TV show, ‘Highway to Sell’.

Avery also attended and covered the 2014 Indian Uprising All Pontiac Weekend, hosted by the Cruisin’ Tigers GTO Club. There he interviewed Jim Wangers, one of the key figures in launching the original muscle car, the Pontiac GTO. 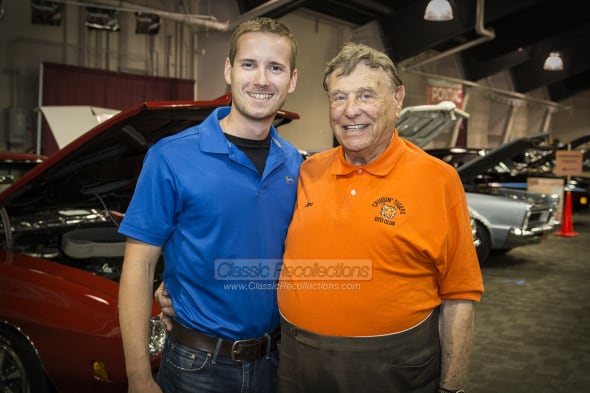 Matt Avery with Jim Wangers, one of the key players who launched the famous Pontiac GTO muscle car.

Avery helped plan, launch and covered the 2014 Randhurst Village Cruise Nights. Classic Recollections teamed up with the Daily Herald, the largest news and community-focused publication in the Chicago suburbs, and the Randhurst Village Mall, located in Mount Prospect, IL and launched a series of successful classic car cruise nights that focused on celebrating the stories behind each and every vehicle. One unique element that set the night apart was an ‘Original Owners Spotlight’. Here was amassed a collection of owners who had purchased their cars brand new. Guests were treated to one of the largest displays of this kind in the area, with many owners having bought their cherished chariots in the 1960s. Other highlights included famous movie car appearances, courtesy of the Volo Auto Museum; the very first 1964 Ford Mustang sold to owner Gail Wise, who also was on hand, interactive exhibits for kids of all ages by the Mount Prospect Fire Department who brought out several rescue and emergency engines. In addition, we were honored to have Rescue 4 on display, a fire engine that responded to the World Trade Center on the horrific events of September 11, 2001. Club spotlights were another favorite, with displays from the Midwest Firebird club and the Illinois Sports Owners Association boasting some of the largest collections of first-generation Firebirds and Triumph vehicles. The event also raised funds and awareness for Clearbrook, an area charity that works to help those with disabilities. Over the course of the events, hundreds of vehicles participated along with hundreds of spectators, car owners and mall patrons visiting and enjoying the gleaming chrome.

Matt Avery and Gail Wise, owner of the first 1964 Ford Mustang ever sold.

At the end of each night Avery presented a special trophy to the vehicle that most embodied the statement of ‘Every Car Has A Story’. 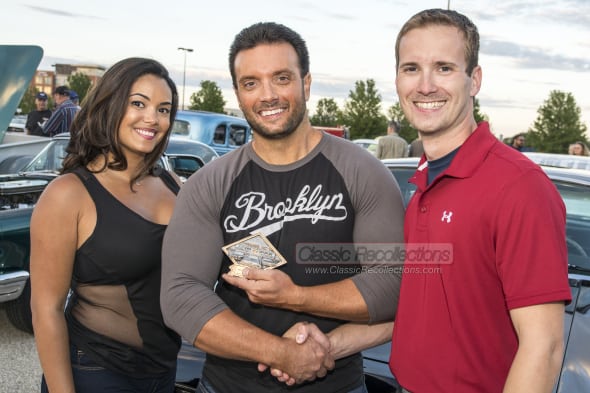 In the fall of 2013 Matt helped launch the Midwest Firebirds Car Club. He served on the Executive Team as Media Director and helped establish a media presence and social media platform the club. He also launched and produced the popular web video series for the club.

Matt & the Executive Team of the Midwest Firebirds Car Club.

Avery also produces the Classic Recollections video web-series. He recently completed production of his special video feature documenting the first-generation Chevrolet Nomad (1955-1957) and the Chevrolet Nomad Association‘s 25th annual convention. It can be watched below.

Avery also produces recaps of events and shows, such as the Muscle Car and Corvette Nationals.

What others say about Matt Avery…

“Matt was hands down the most professional outgoing fun energetic person I’ve ever dealt with! We had a blast working with Matt.  He has a real true talent and passion for what he does. It’s refreshing to see someone so talented and passionate about his work.  He is the part of the new generation of hot rodding that will keep this hobby and tradition fresh and alive for years to come! I know a lot of people including myself who never would even have picked up the Herald if it weren’t for his “Classic Recollections” section. He really gives 150% to everything he does when it comes to shooting pictures and video.  The way he described my car in the article and his wording was amazing. He did not change anything to suite the target audience but gave an accurate description in his own words.  I would definitely suggest and refer him to anyone looking for real talent in the car/hot rod scene.  He is “the guy” to go to when it comes to car photography, video, and articles!!”

Avery provides consultation for the classic car hobby and can be interviewed for group events, club meetings or business groups about the classic car industry, the shifting direction to younger buyers, future collectibles or other niche topics. 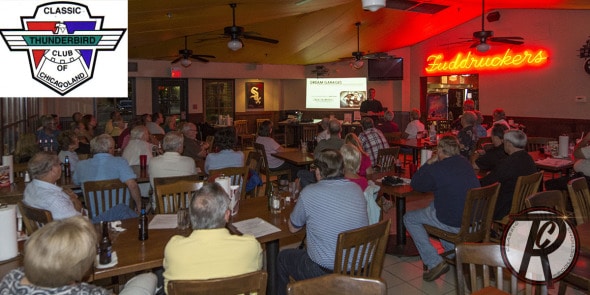 Matt Avery with the Barrington IL Rotary Club after a speaking engagement discussing how he’s using social media to engage younger generations to have an interest in classic vehicles.